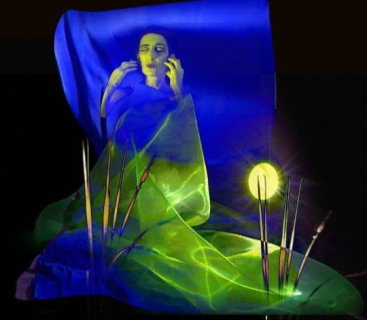 Kathy Rose’s work has evolved from her early drawn animated films of the 1970’s, through her unique, pioneering performance work combining dance with film in the 1980-90’s, to her current surreal performance video spectacles and installations, with influence from symbolist art and the Japanese Noh theater. Rose received a Guggenheim in Performance Art in 2003, and in 2005 was awarded a New York State Council on the Arts grant in Video (Media & New Technology).

Recent one-woman shows also include the Pompidou Center for  “A Shaded View of Fashion Film Festival”, and at the EPOS Film Art Festival  at the Tel Aviv Museum, etc.

Rose is a Master Lecturer in the Media Arts Department at The University of the Arts in Philadelphia. Her courses   include Image and Performance (an interdisciplinary workshop in which students make their own performance art works using costume, video, audio, etc.), Dance and Media, Japanese Media and Installation. She has also taught Autobiographical Art  in the Fine Arts Department, and  in the Pre-College Program, along with Art and Performance.